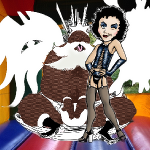 Welcome to my talk page. Leave a message...if you dare.

Came out similar to how i thought just some notes. While the general concept is there are things i noticed. 1.) the color scheme is not equal proportions blue, white, red white is small compared to the other colors and so is red. 2.) the pictures you pushed to the sides to fit them in which given the way the whole thing can be placed on he site using Css its not necessary to do that as well as not necessary to take out the middle portion. The point would be for me to make the black portion translucent to see the work you have done. Let me know what you think.--Salubri (Chat) 20:19,6/30/2013

Ok you got the color concept down but the images are off now. Basically the color concept of the second one with the image placement of the first one the only thing is im not sure whats gonna be in the middle yet on the white but probably not bachs ugly face lol. --Salubri (Chat) 23:52,6/30/2013

The Logo vs. idea may work or even have a pic of whites face one or the other. As for the image placement i wanted it as you had it previously but i dont want them squished to a small size but i dont want them huge either. like an acceptable size so it doesnt like squished but it doesnt look to big, the basically have to be uniform to one another. You wouldnt want the image on top to be bigger then the one on the bottom or the one on the other side. So basically Masaki on top and isshin on bottom on the blue side, Unohana on top and Yama on the bottom on the red. Its basically a image size issue at this point.--Salubri (Chat) 00:18,7/1/2013

Honestly, I'm not sure where you've been getting most of the images. I've been playing directly off my Wii (with Homebrew and a flash drive since the disc reader's busted, but that's irrelevant), but I'll look around and see what I find, unless you know of a good program that can rip the images/cutscene videos right of the .iso files.

That's some well-guarded secret. Anyway, that'll be useful to grab images from.

Could I ask a big favor of you? Bleach Fan Fiction Wiki is currently undergoing some style changes, and we would like a Quincy background, similar to the one you guys currently have, with pictures of various Quincy from the Vandenreich. The problem is, no matter what I do, I always get too big of a file and can't ever seem to get it to be the right size without making it look terrible. Could you give me some tips, or perhaps make one for us? I would be very appreciate if you would help us out. ~~TenTailedFox <talk> 19:45, July 19, 2013 (UTC)

Hey there, Lemursrule, my name is Doug from Wikia's Community Development Team! Our Licensed Video Library has a few trailers for Bleach: SOUL RESURRECCION and Bleach: The Blade of Fate. What is the wiki's policy on embedding video galleries in article pages? The videos in our library are properly licensed and will never be removed for any sort of TOS violation. Just wanted to make sure before I made any edits! Appreciate it, have a good one!
Doug (profile)•(talk)•(email) 18:48, September 3, 2013 (UTC)

Hey Lemurs, I noticed some of the recent episodes are missing their dub dates, and I plan to fill it out. I just remember you saying there was one week recently that there wasn't a new one, and I can't remember which week it was. If I can just get an answer on that, I can fill out some of the infoboxes.

An offer I can't refuse

I saw your offer to redo or create a duotone/black and white background on the image gallery talk page, so here's an idea: Isshin, Masaki, Ichigo, and Yhwach (the former two in their positions on the backgrounds you made and the latter two in their positions on the current background) but drawn in the ink style you used for the background options. There would be two sections on either side, each with two boxes: one side would have Ichigo and Yhwach (with Ichigo drawn in black and placed against a white box and Yhwach drawn in white and placed against a black box) and Isshin and Masaki on the other side (with Isshin drawn in black against a white box and Masaki drawn in white against a black box).

Since Chat's being bad tonight, I'll tell you my thoughts regarding Nozomi's voice actress. I will consider it possible, because there's something familiar about her voice, but at the same time, it's still different. However, I don't want to say anything unless we can find definitive proof, since I'm sure a lot of people are throwing their speculations in on the possible voice actress. Arrancar109 (Talk) 00:50, October 14, 2013 (UTC)

Unfortunately, no, I don't have a way to record my TV, nor do I know how to rip files. However, I could try to find Youtube videos of people showing off the models and try to fool around in Paint or something.

I posted a Facebook comment from Cindy Robinson on Facebook where she confirmed that she voiced both Jinta and Kiyone. But I don't think that she actually voices Jinta, because it's not her voice. She must have seen one of the characters she recogniced and then commented.

Jinta is voiced by Jeannie Elias. On her website it's written that she's in Bleach and when it's written on an official website it's not often based on lies. Of the two characters in question Cindy only voiced Kiyone.

Please remove Cindy from Jinta and re add Jeannie Elias. Sorry that I didn't contact you earlier about this. If there's any questions just contact me on this link: A-Stone User Talk--A-Stone (talk) 14:40, May 6, 2014 (UTC)A-Stone

Ah, sorry about that. I was asleep, since it comes out at around 2 am my time and SCHOOOOOOL. I'm making it right now.

Ah yes, I thought it was gonna be Grimmjow because of the Garganta that apparently opened, but this works too. Apparently Sun also called it.

As far as merging two separate categories you would have to show me why we have two categories and what we are doing. Also im not sure about a massive upload of images, i know of batch delete but i dont know if we have a tool for mass uploads of images if thats what your asking.--Salubri (Chat) 23:55,6/15/2014

*buts in* The two categories have been replaced with Category:3rd Phantom Screenshots for all the images (similar naming convention for the other categories).

Might be of some help: Special:MultipleUpload. It used to be better, but Wikia "refined" it a couple of years back and it lost a bit of functionality. But thought you might still find it useful. ~~Ууp <talk> 10:03, June 16, 2014 (UTC)

Also, er, looking at the sig when I'm not half-asleep, it's really, really big. Like, DB wiki levels of huge is what we're talking here. Do you think you could make it look something like this instead so it doesn't screw up talk pages and stuff?

Can you hear the wails of the Hitsugaya fangirls?

So I heard you were born 22 years ago today or something and I guess that's cool and stuff.

Seriously though, have a wonderful day, which I'm sure will be ensured by the fact that you're going to see Guardians of the Galaxy, otherwise known as Groot: The Movie.

Holy crap! It's your birthday! I might not have noticed if it weren't for the long-ass header that popped up on the Recent Activity page. Dammit, Xil. Anyway, have a very happy birthday! Mohrpheus (Talk) 08:24, August 4, 2014 (UTC)

Happy anniversary of your escape from the womb, Lemurs. I can't top Xil, but I do have coffee and Zoloft.

Hey, are there any articles on the DS games that are in need of serious work? I'm considering getting one or two for funsies if possible, and I was thinking that I might as well get ones that have low-quality articles which I could improve if I'm doing so.--Xilinoc (talk) 01:08, September 17, 2014 (UTC)

Wow okay that was great.

As it stands that time sounds fine by me.

Re: bringing sexy back

Retrieved from "https://bleach.fandom.com/wiki/User_talk:Lemursrule?oldid=474072"
Community content is available under CC-BY-SA unless otherwise noted.