Can you help with one of the many tasks that need doing here? Some of the main ways you can help out are listed here. Thanks!

Song to listen to while reading this chapter: https://www.youtube.com/watch?v=UDS5HSr1B-I (you guys have no idea how much I wanted to use "I Need A Hero", NO IDEA)

Okay, so this chapter was a bit jarring, even for me.

Alright, so first we've got Kensei coming back and making his counterattack!...for all of 13 seconds. Hey, at least this time we got to see him being defeated for ourselves. And wouldn't you know it, Mask has his own goddamn WRASSLIN MOVES (oh this keeps getting better and better). But sheesh, he sure beat the crap out of poor Kensei. It's too bad that he didn't do what people were predicting he would do last chapter and put on his mask before reducing Mask to shredded meat, but oh well.

Gotta wonder how much power Sandbag Beat would've packed if Kensei used it in his Bankai. 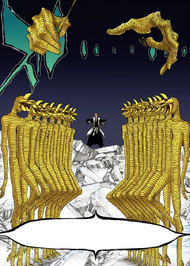 Anywho, then James gets bifurcated - that's the first time the chapter shocked me - and then Rose activates his Bankai (that's the second time for those not in the know). Honestly, I wasn't expecting ANYTHING like this, but it seems Kinshara Butōdan allows Rose to troll his opponents by making them THINK they've been hurt, causing their body to in turn hurt itself or something. Could've sworn I've seen something like that on TV. Anywho, the first act is straightforward enough with the water, the second act I like because 1. Greek mythology and 2. Kubo possibly going with his own spelling of Prometheus (that is, if MP didn't just make a typo), and the third act...we don't get to see the third act because Mask CRUSHED HIS OWN EARDRUMS.

And then - and THEN - Mask fires a goddamn laser out of the star on his forehead. Lord have mercy, I'm about to overheat. He's like a Carebear on Creatine and a balanced breakfast. But then, Renji shows up with one of the best one-liner responses I've heard for "Who are you?!":

Anywho, I do like this chapter, though not as much as previous ones because of how jarring it was. I appreciate the fact that we've finally seen Rose's Bankai, which is actually fairly interesting, and got more wrasslin' stuff from Mask, but the pace seemed a bit off: Kensei gets beaten, then James gets cut in half, then Rose goes Bankai, then Mask blows a hole in his chest. I mean, I like the content, but it just feels...jarring. (man I cannot come up with good synonyms at 11 PM for the life of me)

Retrieved from "https://bleach.fandom.com/wiki/User_blog:Xilinoc/Ch._561_-_THE_VILLAN?oldid=417427"
Community content is available under CC-BY-SA unless otherwise noted.