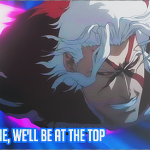 Well, where to start...... Okay, my favorite animes/mangas of all time are (in order of my love for them) Dragonball series (from Db to DbGT), Yuyu Hakusho, Bleach , Death Note, Ronin Warriors, Yu-Gi-Oh (Gx and 5ds as well, 5ds more), Big-O... get off my lawn

I love the anime (especially the English Dub........you don't usually hear a fan say that lol) and I love the manga chapters (mostly because I'm hoping for an update on Grimmjow's status). I enjoyed the Bount Filler Arc (this is the best filler arc in anime history......it was so good I thought Tite Kubo wrote it himself, kudos anime team) and the Shusuke Amagai Filler Arc (except for his overly complex plan), but I'm not feeling the Zanpakuto Unknown Tales Arc however. Surprisingly though, I hated Bleach at first. However I stumbled across this wikia and started to read up on the characters and premise of this show, then I tried out the anime and eventually the manga, and now i simply adore Bleach. So thank you Bleachwikia and all who help to make this wikia as professional as it can be.

I just realized I really said nothing about myself, so here goes:

Location: US of A

Szayel is number one because of his eccentricity (which many fans interpret as his ho......ah I wont go into detail :P), he entertains me from the way he talks, to the way he drew his sword, heck, even his Resurrección (Fornicaras) was entertaining (swallowing your sword, getting fat, then shrinking while moaning.......truly entertaining). I enjoyed every second of his fight with Uryu, Renji, Pesche and Dondochakka. He showed that brains can beat brute force any day, something that most manga/anime don't show. He was only defeated because he encountered an even crazier and more eccentric scientist. With that, the only reason I don't like Mayuri is because he looks so weird, while Szayel is..............hot (cant believe I just said that lol). Since he didn't go to hell, maybe he'll become a Shinigami in Squad 12 since he is now purified.

Well, where to start? In contrast to Szayel, I love the destruction he causes. His title as Espada of destruction fits him perfectly. Every fight he's been in usually leaves the area around him in shambles. One of Grimmjow's best scenes ever was when he impaled Luppi with his bare hand (now that's what I call an aggressive takeover.........okay that was a pathetic attempt at a joke :P). Grimmjow apparently only fears Aizen, as he didn't hesitate to fight an Espada two ranks above him, and constantly "challenging" Tosen. I'm gonna wrap this up, but trust me, I can go on and on.....

Well, mostly grammar fixes. Sometimes I stumble upon anime-only characters and end up having to change a lot plus adding new info, but its fun because I watch the anime a lot. So far I haven't done any real MAJOR editing, just the small stuff.

Retrieved from "https://bleach.fandom.com/wiki/User:Grimmjow2?oldid=415470"
Community content is available under CC-BY-SA unless otherwise noted.