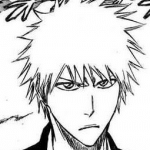 Hi, I am called Gran Danku (王斷空, Guran Danku; Grand Splitting Void) and I like animes (currently only Bleach) and recently also mangas.

Initially, when I got a box of Bleach cards from my uncle (he didn't know about the series yet), I didn't like the Bleach series until my mid-sixth grade. I first watched it at TV and then in the computer. Because I like more anime than manga, I watched all of the anime episodes (including the last one released) (but for my whole seventh grade I did/took a break and then from end-year and until the big vacation I returned to watch it in the computer), as well as all of the manga chapters, but I advanced much more in the anime than in the manga. On the 18th of June, I finally finished reading my missing chapters I didn't read, and now I am currently at the last chapter released.

Retrieved from "https://bleach.fandom.com/wiki/User:Gran_Danku?oldid=510833"
Community content is available under CC-BY-SA unless otherwise noted.