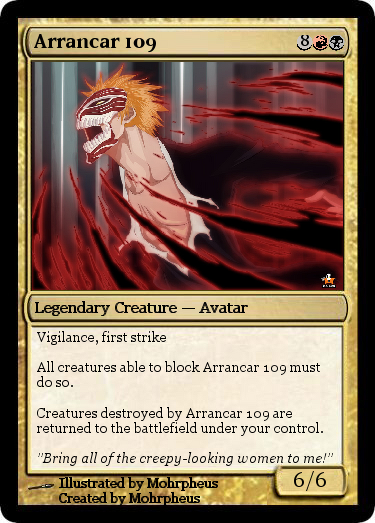 Well, here I go by Arrancar109. I've actually been a fan of Bleach since 2006 when it first hit North America. Overtime, I found myself getting into the subs as well, and then the manga. I try to keep my eyes open for as much Bleach info as possible.

However, I'm one of those guys who hates being spoiled about manga chapters that are yet to be translated and released, and as such, if I find any spoiler info, I will immediately delete it without a second thought. Guys, seriously, wait until the chapter is translated and released. But if you feel the urge to post the info, then please use the Spoiler page instead. Not very many people like being spoiled, and I think we should be fair to them.

Also, I'm not one who enjoys unproven or unhinted speculation, so I will get rid of those too. Some things have been implied, yes, but don't put on opinions and theories that make no sense.

Oh yeah, I am also somewhat of a grammar freak. I don't go looking for it, but from time to time, I will edit some grammar to correct it if I find it on an article I'm browsing through. We seem to have a new Grammar Corner up, so it seems like we won't have too much to worry about.

Those notes aside, I can get along fine with most other contributors on this wikia and hope that we can all work together to make this wikia a great one.

This Wiki has been growing ever since I first joined, and after we were able to get some more active administrators, we eventually found ourselves creating a system of policies which helped cut down on edit wars, held back spoiler information, cut out every trace of junk trivia, stop crack theories from appearing, as well as many other things that were once plaguing this Wiki. For anyone who joins, please take the time to read our policies, as they are for the benefit of all and will be enforced.

Ichigo's been one of my favorites since the beginning. He's shown some pretty favorable traits throughout the course of the series. Aside from his desire to protect those close to him, he has shown that he has a code of honor and that he is observant to what goes on around him. His powers are also a point of interest, as his unusual growth potential has been evident throughout the entire story, and is clearly a focal point to the plot. Both Ichigo's Zanpakutō and his Hollow powers are interesting aspects of his power, especially with the change of his Hollow powers. After he lost his powers, he tried to settle into a normal lifestyle, but as Chad pointed out (which Ichigo denied until later), Ichigo did not like being powerless, and as soon as it became apparent that he might need some means to protect his friends and family, he decided to discard that ruse in favor of what was truly in his nature. Like many other fans, I was anticipating the return of his Shinigami powers for a long time, and was glad to see that they were finally back.

Yoruichi is an intriguing character in the series. I've always wondered why a cat could talk until she revealed that she was actually a Shinigami. Her knowledge of Soul Society and experience as a teacher has helped many of the characters in the story. Her status as the ex-commander of the Onmitsukidō was a big revelation and explained why she was so strong, even though she has been out of combat for over 100 years before fighting Soifon in battle. Naturally, her revelation in the Turn Back the Pendulum series as the 2nd Division captain didn't surprise me. Still, I wonder what her Shikai and her Bankai are like. Hopefully we'll find out. Either way, she has still proven to be a powerful character in the series.

Grimmjow has always been a favorite of mine since his debut. Many of the Espada follow Aizen loyally, but Grimmjow's not afraid to do what he wants, even if it does conflict with Aizen's interests. Despite his nature as a loose-cannon, Grimmjow has shown to have some form of honor, since he wanted Ichigo at full strength for their final fight, instead of fighting him while he's half-dead, and he saved Orihime in return of her fixing his arm, which restored his power as a result. Aside from Grimmjow's independent nature, he has also shown to be a powerful and very proficient in fighting, which is evident from his fights with Ichigo, as well as his fights with Ulquiorra and Shinji. His Resurrección is impressive as well, definitely one of my favorite Resurreccións. At this point, I just wish we knew what became of him. Unless Kubo has some role for him in the future, it seems ridiculous to play the fate game with him. Hopefully we'll learn what became of him.

Kūgo Ginjō has become one of my favorite characters as the Lost Substitute Shinigami arc progressed. He has proven to be a valuable ally to Ichigo and went through great lengths to both develop Ichigo's Fullbring powers and protect him from Tsukishima. Kūgo was a great ally to Ichigo, but sadly, he turned out to be under Tsukishima's influence. Like several others, I feel that Kūgo wasn't a great bad guy and it was ultimately a mistake to make him into one, especially with how the arc reached its conclusion. And unfortunately for us, we are still unclear about some of the deeper details in his past, and it is unknown if we'll ever learn anything more about him at this point. In my eyes, Kūgo is definitely one of the characters that had great potential.

Chad is one of my favorite characters and has a lot of potential. Loyal and strong, Chad has stuck by Ichigo ever since the two of them met, helping him rescue Rukia Kuchiki from the Soul Society, trying to help him restore his powers after he lost them, and tried to protect him from an enemy neither he nor Ichgio understood. As one of Ichigo's closest friends, he has a good understanding about how Ichigo thinks and was the first to confront Ichigo about his true feelings regarding his powerlessness. I know many people have mixed feelings regarding them, but I always liked Chad's powers, and as such, I was interested in how they would develop. Chad's powers also had a lot of mystery behind them, even when Kubo explained their similarity to Hollow powers, but when Kūgo Ginjō and Xcution came along, the nature behind his powers were explained.

Nel was always an enigma to me. I initially found it interesting to see an Arrancar kid, but after reanalyzing her from what you learn from the series, I found her more intriguing. But it was kind of hard to take her seriously most of the time, since she provided mostly comic relief. I don't think anybody was expecting her sudden transformation during Ichigo's encounter with Nnoitra, as well as her ability to hold off Nnoitra. She has proven to be a very powerful character in the series. In addition to her strength as a former Espada, she also shows a less violent nature (even in her adult form), something not seen in most Hollows and Arrancar. I seriously do wonder what's going to happen with her as the series progresses, but given the current events occurring in the manga right now, we won't know for awhile.

Ah yes, Amagai. Probably one of the more shocking of the characters on this list, given that he's the only anime-exclusive character here. I initially had concerns about Amagai, as I (among many other people no doubt) thought that making an anime-exclusive character a captain was a step too radical for the anime, and that he was either destined to die or step down as captain. But I have to say, Amagai grew on me as his story arc progressed. He has proven that he has great leadership skills, as well as being an effective strategist, in addition to being a powerful combatant. While it was a shocker to everyone that he was the true mastermind in the Amagai arc, we learn that he, too, was a victim. Additionally, in the end he has shown that he regrets what he did and that he really did enjoy his time serving as captain. To this day, Amagai is still my favorite anime-exclusive character.

More of my contributions