Edit this page
watch 01:55
Cobra Kai Season 4 - The Loop
Do you like this video?
Play Sound

Bleach: Spirits Are Forever With You
This article is about the manifested spirit of Sōya Azashiro's Zanpakutō. For his Zanpakutō and its abilities, see Urozakuro.

Urozakuro's manifested spirit takes the form of a rather tall, busty female with long black hair fastened with a golden braid into a fan shape in the back, and two pony tails on either side. She has two straps covering both eyes, and wears a large lavender robe with very large sleeves, and black lining around the shoulders, exposing her cleavage. She is also said to resemble Sōya's sister.

She appears to be quite unhinged and insane, commonly laughing in a psychotic matter and also is quite playful, teasing her master on a regular basis.

Bleach: Spirits Are Forever With You 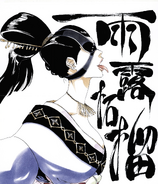