As Ggio raises his bladed right hand upward while drastically increasing the quantity of Reiatsu he is releasing, his veins start to bulge noticeably throughout his entire body. As large, curved blades viciously erupt outward from beneath his hands, Ggio's muscle mass increases greatly, with the white portions of his clothing becoming brown in color and the red markings on his face growing more prominent, due to them enlarging in size. Ggio refers to this as the "true battle form" of his Resurrección.[1] However, due to Ggio's death at the hands of 2nd Division Captain Suì-Fēng shortly after performing this technique, the true capabilities of this form were never actually observed.[2] 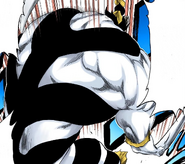 Ggio in his Tigre Estoque El Sabre form.
Add an image to this gallery

Retrieved from "https://bleach.fandom.com/wiki/Tigre_Estoque_El_Sable?oldid=500478"
Community content is available under CC-BY-SA unless otherwise noted.