The Almighty (全知全能 (ジ・オールマイティ), Ji Ōrumaiti; Japanese for "All-Knowing") is an ability used by Yhwach or Jugram Haschwalth that allows one to perceive and potentially alter the future.[1] According to Yhwach, The Almighty is proof of a "true Quincy".[2]

When a Quincy such as Yhwach or Jugram Haschwalth activates The Almighty, their irises and pupils split in two.[4][5] After Yhwach was sealed away, it took 900 years for his heart to begin beating once more, 90 years for him to regain awareness, and 9 years for him to regain his power. If he were to open his eyes before those final 9 years had fully elapsed, he may have been unable to fully control his power and accidentally stolen all of the power from his loyal Sternritter. With this power's activation, Yhwach achieves his full strength.[6] Yhwach gains an additional pupil in each eye after nullifying Ichibē Hyōsube's Futen Taisatsuryō.[7]

Appearances in Other Media

In Ryōgo Narita's novel Bleach: Can't Fear Your Own World, the The Almighty is revealed to originally be the Soul King's signature power, which Yhwach inherited due to being the King's son. Read more...

Yhwach uses The Almighty to restore his powers. 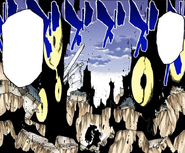 Yhwach using The Almighty to merge the worlds. 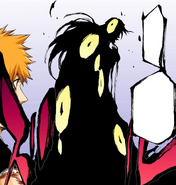 Yhwach resurrects himself through The Almighty.
Add an image to this gallery

Retrieved from "https://bleach.fandom.com/wiki/The_Almighty?oldid=545558"
Community content is available under CC-BY-SA unless otherwise noted.