This technique uses five Seele Schneider to create a pentagon-shaped seal which, when activated, creates a massive explosion within its borders. When an object or a person stands within the middle of the pentagon, the placement of the fifth Seele Schneider can trap them by wrapping and binding their legs to the ground with dense Reishi. The Seele Schneider function as accumulators, gathering the necessary amount of Reishi to create the explosion. The liquid inside of a Gintō acts as the trigger. The preparations for the technique, combined with the charging time, makes using Sprenger while in battle impractical unless the user has a partner who can stall to buy time or enough strength to create the formation while under attack.[1][2] 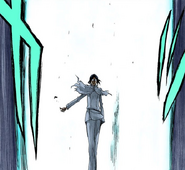 Szayelaporro Granz is caught in Sprenger when Uryū uses it against him. 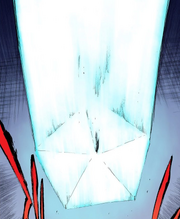 Szayelaporro is attacked with Sprenger.

Szayelaporro is trapped with Sprenger.

The explosion from Sprenger begins to envelope Szayelaporro.

Yammy Llargo is caught by Uryū when he uses Sprenger.

Yammy is engulfed with Sprenger.

Uryū and his friends unite to attack Ōko Yushima with Sprenger.

Uryū watches as Yushima is engulfed with Sprenger.