Shunkō is the highest form of Hakuda technique. It comes in elements such as 'wind' or 'lightning'.[4] It is an ultra-powerful technique in which one drives Kidō into one's arms and legs.[5] The Kidō itself can be controlled and fired at opponents from the body.[6] Shunkō was first used by Captain Suì-Fēng in her fight against her old master, Yoruichi Shihōin. Suì-Fēng states she invented the technique of combining Kidō and Hakuda so recently she had no experience with it in battle, let alone enough time to give it a name. Yoruichi, however, reveals Shunkō is the technique's name, and she invented and learned the ability long before Suì-Fēng. The keisen uniform has no back or sleeves because the fabric will rip apart when the user's back and arms are filled with Kidō. Though Yoruichi's Shunkō is perfected, she still has difficulties controlling it. The uniform worn when punishment is carried out is specifically geared for Shunkō.[5] By concentrating Shunkō around a particular area of their body, a practitioner can prevent attacks from damaging or piercing this area.[7] 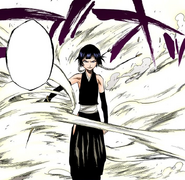 Yoruichi uses her Shunkō, revealing that hers is based on lightning. 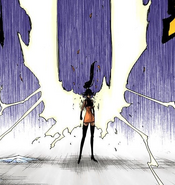 Suì-Fēng and Yoruichi face off with their different types of Shunkō.

Suì-Fēng breaks free and goes in for the kill using Shunkō.

Suì-Fēng holds back a sphere of electricity while using Shunkō.

Suì-Fēng prevents Suzumebachi's stinger from penetrating her cheek by concentrating her Shunkō around that area.