Edit this page
watch 02:07
Spider-Man: No Way Home Trailer Dropped - The Loop
Do you like this video?
Play Sound

Generating high-temperature flames, the practitioner discharges it from one or both hands.[1] The practitioner generates and fires an orb of crimson red energy on his/her palm or finger. The orb can be small, medium, or large, depending on the level of power being used. The destructive power released by the blast can vary between a simple explosion to a pillar of energy, and in both instances, the spell causes concussive as well as burn damage.[2] It is one of the mid-level Hadō spells as well as one of the common spells taught at the Shin'ō Academy. It tends to be many Shinigami's default offensive spell, for both those well versed and not well versed in Kidō. However, the spell does not necessarily have to be used for offensive purposes, and can be used as a source of light in dark places.[3]

"Ye lord! Mask of blood and flesh, all creation, flutter of wings, ye who bears the name of Man! Inferno and pandemonium, the sea barrier surges, march on to the south!" 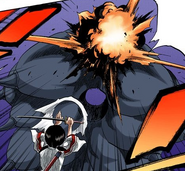 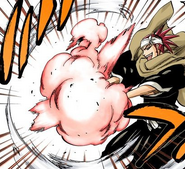 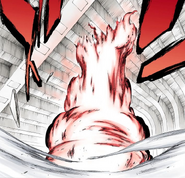 Momo, Renji and Izuru use Shakkahō against a large Hollow.

Rukia uses Shakkahō against the Bount.

Rukia uses Shakkahō against Hō and Ban and their Dolls.

Rukia targets, what she thinks are Bitto, with Shakkahō.

Baura uses Shakkahō after swallowing it.