Pointing his/her index finger at the target, the practitioner generates a spark of yellow energy, which summons six thin, wide beams of light that slam into a target's midsection and hold them in place. The target is unable to move any part of their body, including the parts which were not struck by the beams.[1] This technique can be used after using Bakudō #4. Hainawa[2] because the six beams of light form from the light already created by Bakudō #4. Hainawa.[3]

"Carriage of thunder, bridge of a spinning wheel. With light, divide this into six!" 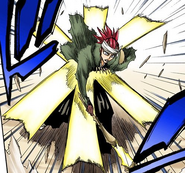 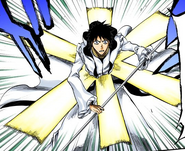 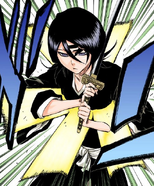 Byakuya prevents Rukia from cutting her own neck using Rikujōkōrō. 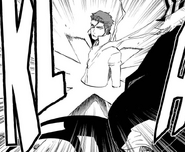 Urahara uses Rikujōkōrō on Sōsuke Aizen.
Add an image to this gallery

Byakuya prevents Rukia from cutting her own neck using Rikujōkōrō.

Rukia binds herself to Sode no Shirayuki with Rikujōkōrō.

Retrieved from "https://bleach.fandom.com/wiki/Rikuj%C5%8Dk%C5%8Dr%C5%8D?oldid=529881"
Community content is available under CC-BY-SA unless otherwise noted.