Locating beings with their spiritual auras

Shinigami, Quincy
Reiraku (霊絡, Spirit Coils; "Spirit Ribbons" in the English dub) are the visualization of Reiryoku into ribbons, which spiritually aware beings can follow.[1]

According to Rukia Kuchiki, this is a high-level technique.[1] When Uryū Ishida uses Reiraku before the start of his and Ichigo's competition, he states it is something which compresses and visualizes the spiritual auras in the atmosphere, and reveals only upper level Shinigami can visualize and touch them. To the user of the technique, a Shinigami's Reiraku is red, while those of other beings are white.[2] Ichigo Kurosaki used this technique for the first time when searching for the Plus Yūichi Shibata hiding inside a cockatiel,[3] and later when he had to journey to his inner world in order to find his Shinigami powers, which were hidden in one box among millions, the boxes representing the humanity of his soul.[4] 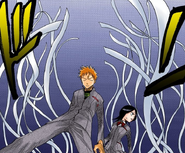 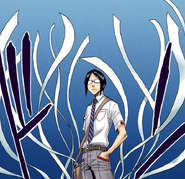 Ichigo finds a red ribbon and finds his powers.

Ichigo starts to use Reiraku to find Yūichi.

Ichigo manages to use Reiraku a high-level ability.

Uryū uses Reiraku and tears off a piece of Ichigo's red ribbon to show it to him.

Ichigo uses Reiraku in order to find his Shinigami powers.