Edit this page
watch 02:07
Spider-Man: No Way Home Trailer Dropped - The Loop
Do you like this video?
Play Sound

A high level technique which allows the user to control their body parts using strings of Reiryoku controlled by their brain, forming lines or strings made of Reishi. Using this technique, the Quincy can control their body like a marionette, allowing them to move freely despite paralysis, broken limbs, or any other force which would impede normal movement.[1] It was originally created to allow elderly Quincy to fight effectively, and is rare enough that Mayuri Kurotsuchi had never encountered a Quincy who could use it before Uryū Ishida, despite having examined and studied 2661 different individuals.[2] 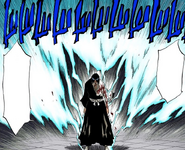 The aura generated by Ransōtengai. 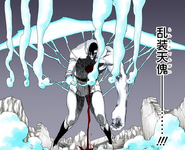 Quilge Opie uses Ransōtengai to move his body despite his severe injuries.

The Reishi threads of Ransōtengai refine themselves into thin strings.