Nel throws her lance at her opponent with extreme speed. As it travels through the air, the lance begins to spin and build up spiritual energy. When it reaches its target, it acts as a drill, inflicting extreme piercing damage. This technique is powerful enough to push back Nnoitra Gilga and break his Zanpakutō, which he was using to block the attack.[1] 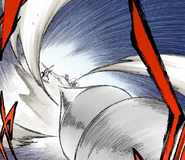 Nnoitra is targeted by Nelliel when she uses Lanzador Verde.
Add an image to this gallery

Retrieved from "https://bleach.fandom.com/wiki/Lanzador_Verde?oldid=500293"
Community content is available under CC-BY-SA unless otherwise noted.