Edit this page
watch 01:33
House of the Dragon Trailer - The Loop
Do you like this video?
Play Sound

Kurohitsugi is a high-level Kidō which seals its target in a black spiritual coffin.[1] The practitioner generates purple/black spiritual energy, which envelops the target with a powerful torrent of gravity before taking the form of a box of black energy, covered in several spear-like protrusions which pierce the box, lacerating the one inside from head to toe. The spell is very difficult to use, as even Sōsuke Aizen could only unleash a third of its power without chanting the particular incantation when he used it on 7th Division Captain Sajin Komamura.[2]

When Aizen later uses it on Ichigo Kurosaki with the incantation, it is noticeably different in appearance. The sky appears to darken as multiple boxes of black energy appear, each of them topped off with cross-shaped spears, before they multiply and close in on their victim. Aizen claims that, at least with the incantation, it has the power to distort space and time.[3] 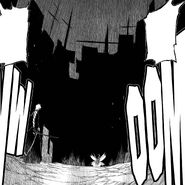 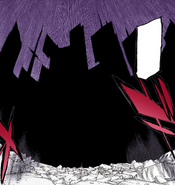