Shinigami
Konsō (魂葬, Soul Burial; Viz "Soul Funeral") is a technique used by Shinigami as a fundamental part of their roles in maintaining the cycle of souls between the Human World and Soul Society.

Konsō is the process by which Shinigami send Pluses to Soul Society from the Human World, which is known as "crossing over". To achieve this, they tap the hilt of their Zanpakutō against a Plus's forehead, leaving an emblem at the point of impact which begins to shine brightly. The Plus proceeds to sink into the ground in a pool of blue light as they are sent to Soul Society, and a Jigokuchō flies away from their point of departure.[1][2] However, if the Shinigami presses the hilt against the Plus's forehead too hard, the Plus is left in pain during the process.[3]

Konsō Reisai (魂葬礼祭, Soul Burial Ceremony Ritual) is a unique, ceremonial version of Konsō performed twelve years after the funeral rites of Gotei 13 captains who perished in battle, where the current captains and lieutenants capture a Hollow and purify it in front of the grave of the deceased captain.[4] Due to the Reishi comprising captains' bodies being too dense with Reiatsu, placing them in the upper three tiers of Spirit Class (霊威, Reii), it cannot naturally break down and be reabsorbed by the soil of Soul Society without intervention, with the ceremony supposedly being used to manually enact this phenomenon. However, the truth is that such potent Reishi can never be reabsorbed by Soul Society, and since allowing overly powerful Reishi to linger in Soul Society indefinitely poses a great risk, the true purpose of the ceremony is to cast deceased captains into Hell.[5] Moreover, the format of the ceremony is notably flexible; though the standard practice consists of purifying a normal Hollow in front of a captain's grave in Soul Society, Jūshirō Ukitake was successfully cast into Hell after his death when Ichigo Kurosaki and the lieutenants slaughtered several Jigoku no Gaki in the Human World while Ichigo was carrying his Substitute Shinigami Badge, therefore allowing Ukitake to witness it.[6]

Before the Konsō Reisai can take place, the current lieutenants of the Gotei 13 are tasked with performing the Jogimen Reibaku (序儀面霊縛, Prefacing Ceremonial Surface of Spiritual Arrest), where they assemble in the Human World and capture the Hollow that is to be purified later.[7]

Appearances in Other Media

In Bleach: Memories of Nobody, the process of Konsō is depicted slightly differently; rather than sinking into a pool of blue light, Pluses sent to Soul Society turn into a small orb of light that ascends into the sky.[8] 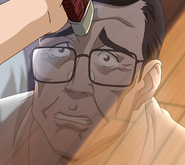 Rukia Kuchiki places the hilt of her Zanpakutō against the forehead of the Glasses-Wearing Ghost. 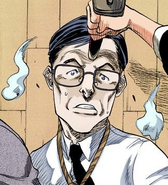 Rukia places the hilt of her Zanpakutō against the forehead of the Glasses-Wearing Ghost. 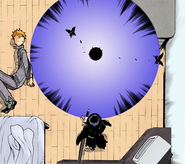 The Glasses-Wearing Ghost disappears as a Jigokuchō flies away.

Ichigo Kurosaki performs Konsō on a young Plus girl.