Don Kanonji focuses his power into the palm of his right hand and generates a tiny ball of blue Reiatsu. He then sends this ball of energy towards his target and while it moves very slowly, upon contact, it explodes with an exaggerated amount of power for its small size.[1] 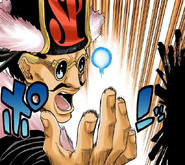 Kanonji sends the slow ball of energy toward Ichigo. 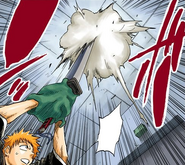 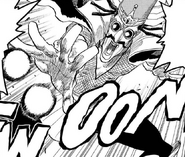 Kanonji uses his Golden Kan'onball technique against Hollows.
Add an image to this gallery

Kanonji sends a Kan'onball towards Ichigo.

Ichigo watches as the Kan'onball floats slowly towards him.

Kanonji's slow version of the Golden Kan'onball is easily dodged by the Hollow.

Kanonji generates the Raizer Kan'onball in his hand.

A Hollow hits the Raizer Kan'onball and it explodes on contact.
Add an image to this gallery

Retrieved from "https://bleach.fandom.com/wiki/Kan%27onji-Style_Final_Super_Attack:_Kan%27onball?oldid=469957"
Community content is available under CC-BY-SA unless otherwise noted.