The practitioner uses a spray can to paint a symbol resembling a "C" within a larger "C" centered around a straight line with another line running perpendicular to it near the end connected to a circle around the other symbols in the air above their target, allowing them to unleash a massive amount of ooze over the area underneath it that forms the phrase "JUST CHOKE YOU" on the outside; this restrains the target and forces them to endure the brunt of any attacks they unleash, but can still be destroyed by an attack of sufficient power.[1] 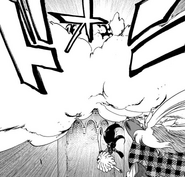 Cinderella destroys the Greedy Curtain with an energy blast.
Add an image to this gallery

Cinderella destroys the Greedy Curtain with an energy blast.
Add an image to this gallery

Retrieved from "https://bleach.fandom.com/wiki/Greedy_Curtain?oldid=537200"
Community content is available under CC-BY-SA unless otherwise noted.