The symbol of the Gotei 13.

9th Division moves out to investigate.

The Senzaikyū guards argue over their reaction to the intense Reiatsu.

Three of the Shinigami sent by Mayuri explode.

A Shinigami threatens to kill his older comrade.

Kenpachi rushes past the Shinigami.

Makizō Aramaki encourages the Shinigami to do their best.

The Shinigami and Zanpakutō enjoy the party.

Mayuri confers his findings to the other captains.

The originals arrive to face the Reigai.

Captains make their way through the Dangai

The Gotei 13 vs. Kageroza Inaba & The Reigai

Remaining Shinigami have a meeting in Ichigo's room.

The Captains are surrounded.

The original Gotei 13 prepare to attack.

Everyone looks on at Yushima's massive technique.

The Shinigami appear behind Ichigo.

The Shinigami force stare down Kūgo.

The officers attack the Hollow.

Aida and Inose try to stop Kibune and Izuru coming to blows.

Other squads pass the third Division.

Inose and Aida look on at drunken Amagai.

Inose and Aida look on in awe at Amagai.

Squad 3 on a mission.

Inose training with his Squad.

Squad 3 at the old Assembly site. 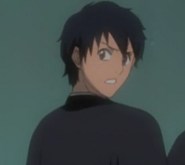 Shinta reports to Izuru and Kibune.

Anxiously watching to see who wins.

Third Division troops arrive.
Add an image to this gallery

Members of the Fourth Division observe the execution. 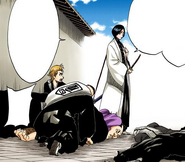 Unohana instructs the Shinigami to take the wounded to the sixteenth relief station.

Yumichika, Ikkaku, Tōshirō, Rangiku, and Renji on the cover of Chapter 197.

The Gotei 13 and the Arrancar on the cover of Chapter 316.

Kenpachi standing with the other members of the Soul society who gave some of their Reiatsu for Ichigo. 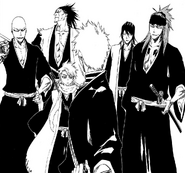 Ichigo reunites with his Shinigami friends.

Yamamoto's death being mourned by the captains.

The captains gather outside the Seireitei in preparation for the arrival of the Royal Guard.
Add an image to this gallery

Add an image to this gallery

The Gotei 13 meet to discuss new information concerning Hitsugaya.
Add an image to this gallery
Retrieved from "https://bleach.fandom.com/wiki/Gotei_13/Image_Gallery?oldid=529501"
Community content is available under CC-BY-SA unless otherwise noted.