The Shinigami in the Gotei 13 make a movie for the "Seireitei International Film Festival."

At a meeting, Lieutenant Nanao Ise announces to the Shinigami that they are going to make a movie, and said that the "lost decade" of the 90's had come and gone, and various financial crises' occurred just as people thought that things were finally starting to look up. And as people stopped spending so much money, people sought low-cost entertainment and began going to movie theaters on long vacations. She said that the Seireitei shouldn't get left behind by that trend. Ichigo Kurosaki then asks if the Gotei 13 were that short on funds. Rukia Kuchiki explains that they need to repair the Soul Society due to repeated emergencies. Ichigo said it was because people don't think about their surroundings when they fight. Nanao then says that the Seireitei has decided to hold a "Seireitei International Film Festival," celebrating the release of the fourth Bleach movie. Ichigo doesn't know what Nanao means when she said fourth Bleach movie. Lieutenant Renji Abarai says not to think too hard about it, and that they should make an awesome movie. Ichigo asks them why he is included.

Ichigo starts walking around the Seireitei, and wonders where they got all the equipment from. Ichigo sees a poster on the wall and sees that it is co-sponsored by Kisuke Urahara's shop. Captain Retsu Unohana, Lieutenant Isane Kotetsu, and Captain Sajin Komamura then approach Ichigo. Komamura states that Divisions 4 and 7 are working together to make a movie. Isane then says that their movie is going to be a drama about animals saving Human lives in a world where disasters destroyed civilization. Ichigo wonders who'll be one of the animals and look towards Komamura, then Lieutenant Tetsuzaemon Iba appears next to Ichigo wearing a dog costume. Iba asks if there's a problem, and Ichigo said he didn't quite fit the image. Komamura thought the costume wasn't as well-made as it could've been. Iba says that it's not the costume, but that his acting isn't good enough. Komamura then says he'll teach him how to be better. Isane then says that maybe they should ask Division 12 for some help, because Captain Mayuri Kurotsuchi was making full-body costumes for his special effects film. Unohana then asks if Ichigo would mind helping them with their movie. At first he is unsure, but Unohana intimidates him so he would say yes.

Ichigo is then seen wearing a dog face on his head. Isane said that it was the main fight scene between the main character and the Human who was turned into a dog-man. Captain Kenpachi Zaraki interrupts them because Division 11 was making a movie too. Zaraki says that he wants to fight Ichigo. Unohana says that Ichigo was occupied with their film. Zaraki then retreats, and goes away. After Ichigo is done helping them with their film, he runs into Captains Jūshirō Ukitake and Shunsui Kyōraku. Ichigo asked if they were making a movie, and Kyōraku said that he was all for it, but Nanao didn't approve of the kind of movie he was going to make. Ukitake was making a documentary film about him living life to the fullest. Renji then comes and says that he is going to help him with his movie.

Ichigo sees Rukia in a costume. Renji states that Rukia is the star of their movie, and he said the movie was called "Battle Maid Cop! Protect the Soul Society from Space Invaders!" Ichigo asks why she is dressed like a maid, and Renji said they needed to incorporate the latest trends. Renji explained that Lieutenant Rangiku Matsumoto was going to play the Maid Cop's rival, and Ichigo's friends were part of the Abarai Gang. Captain Byakuya Kuchiki was going to be their special effects person.

Renji started filming his movie, and Rukia was in trouble so Ichigo had to save her. Since Yasutora Sado and Orihime Inoue were under control of the Maid Cop's rival, they had to stop Ichigo from saving Rukia. Byakuya does Kidō as the special effects, and hits Ichigo and falls into a deep pit. Rukia frees herself and defeats Orihime and Chad. Rukia is sad about Ichigo's sacrifice, but Ichigo gets back up saying that she won't kill him off that easily. The crew then goes to Sōkyoku Hill, where they were going to shoot the end of the film. The Onmitsukidō then comes and says they are not allowed to be there, and chase them. They get to the secret underground passageway, and Byakuya says he wouldn't lose to the stealth force, and releases his Bankai. Part of the ceiling collapses, and it fell really hard into the water and the water exploded through the roof. That was the end of their movie.

Shinji Hirako also has plans to make a movie. Hiyori Sarugaki wants nothing to do with it until Shinji promises her she can be the star. It turns out the starring role is that of a Godzilla like monster in a title called "Great Monster Hiyora". Hiyori whacks him with the costume's tail.

Characters in Order of Appearance 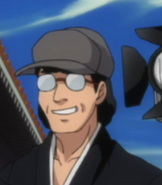 Retrieved from "https://bleach.fandom.com/wiki/Film!_Festival!_Shinigami_Film_Festival!?oldid=506257"
Community content is available under CC-BY-SA unless otherwise noted.