Pesche and Dondochakka charge their Cero simultaneously and combine them, forming a large, swirling sphere, before firing the combined Cero as a multicolored beam.[1] Although it does not work on him, Szayelaporro Granz states it is a "marvelous technique" and admits he would have been defeated if Pesche and Dondochakka had used it before he had time to analyze their Reiatsu.[2] Its use greatly drains Pesche and Dondochakka, leaving both of them panting and ready to collapse after performing it. However, there is a small fissure between the two Cero, as they are not perfectly fused; by applying pressure on this fissure, the combined Cero will split apart and harmlessly pass around the target.[3] 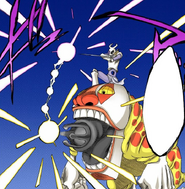 Pesche and Dondochakka begin to combine their Cero.

Szayelaporro watches as the Cero Sincrético begins to take form.

Szayelaporro diffuses the Cero Sincrético.
Add an image to this gallery

Retrieved from "https://bleach.fandom.com/wiki/Cero_Sincr%C3%A9tico?oldid=500295"
Community content is available under CC-BY-SA unless otherwise noted.