Carbon-Copy is a technique used by Szayelaporro Granz in his Resurrección, Fornicarás.[1]

Szayelaporro can unleash a massive amount of black liquid from his back. As soon as a droplet of this liquid touches a target, a clone of the target soon sprouts from the area of the liquid that touches them. These copies have the exact same abilities as their original counterparts. Due to the sheer amount of liquid that Szayelaporro releases into the environment, he makes it nearly impossible for his opponent to avoid the liquid while in the immediate vicinity with him.[1] To add to the large number of copies that are created from the initial attack, when they are defeated, the imitations break apart and multiply, increasing their numbers even further.[2]

The clones are usually almost identical in appearance to their original counterparts except they have entirely blank eyes, lacking irises and pupils, that are surrounded by four black markings. Despite their nature as clones, Szayelaporro can easily alter their appearance during the creation to make his copies more aesthetically pleasing to his tastes. He removed the spots from his copies of Dondochakka Birstanne and made sure his imitations of Pesche Guatiche wore pants instead of a loincloth.[3] 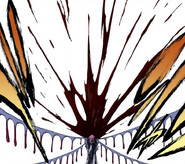 Szayelaporro begins to use Carbon-Copy.

Dondochakka is cloned with Carbon-Copy. 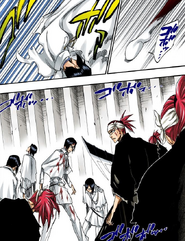 Renji Abarai and Uryū Ishida are cloned using Carbon-Copy.
Add an image to this gallery

Szayelaporro begins to use Carbon-Copy.

Renji is confronted by a clone with Carbon-Copy.

Pesche Guatiche is cloned using Carbon-Copy.
Add an image to this gallery

Retrieved from "https://bleach.fandom.com/wiki/Carbon-Copy?oldid=510234"
Community content is available under CC-BY-SA unless otherwise noted.