Edit this page
Welcome to the... 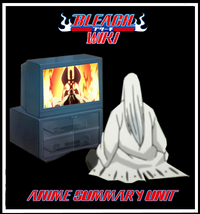 Welcome to the Anime Summary Unit!! Please Read THIS BLOG in regards to how to get started on Bleach Wiki! Just claim an episode and start writing! Hope you enjoy working here!

The Anime Summary Unit is a group of Bleach Wiki users who have the task to complete and improve the anime episodes of Bleach. Provided are a list of episodes from a specific story arc that are in need of completion. All users should read our Article Guidelines before you start improving.

Roles of the Anime Summary Unit

The following are the duties of the Unit:

Anyone willing to contribute to the project will be able to use this badge on their User Page.

Of course, there are several other badges available through contribution to Policy and Standards Committee projects. Check them out!

If you want to participate in this project just claim an episode from the story arc episode set below by putting your name next to the episode and list the status as incomplete. When you have finished adding the summary for the episode, change the status to needs checking for completion. Once all the episodes are done, we can move on to the next arc. The goal would be to get one arc done per month. But, of course if it is done sooner then we'll move on to the next arc sooner. Of course, if you are done with your episode and want to do another one (that hasn't been claimed yet) then you can do so. But remember! This is supposed to be fun and not stressful! So if you claim an episode but find that the week has become busy, just unclaim it and don't worry about it.

Also, you do not have to be a committee member to participate. However, please be aware that the committee members will be reading over all summaries, including those by other committee members, for quality assurance purposes. This is all for the sake of making the summaries the best they can be for the benefit of all wiki users.

These are the Guidelines to keep in mind when writing summaries and they are also things that might be helpful if you writing an episode summary for the very first time. They are also designed to comply with wiki best practice.

This section is a work in progress. Please feel free to add your own suggestions, tips and tricks.

1. The episode summary is not supposed to be a substitute for actually watching the episode. As such, there is no need to give minute details of everything that's happening. This includes battles. There is a project that is going to have battle details, so every part of the fight does not need to be stated. Remember, it is a summary only.

2. Please keep in mind that this is a wiki and so please do not speculate or write in an opinionated/leading manner when writing the episode summary. Just describe things as they unfold, and when in doubt, go for neutral tone and wording.

3. Links - please consider providing one where you think that the reader of the summary might want more information on either a character or a term.

4. Please do not forget to fill in the other episode details when, before, or after editing the summary, such as the characters in order of appearance list and the powers and techniques list.

5. In the summary we should only include what happened in the episode. Recaps and Previews from the previous episode(s) and for the next episode are not to be added.

6. Always remember to keep the Manual of Style, particularly the In-universe part, in mind while writing the summaries. See the Layout Guide to see how episode pages should be laid out and organized.

Characters in order of appearance

For the most part, characters that don't have their own articles here won't be listed as a character on this list, with a few exceptions.

Each episode should have a "Fights" section between "Characters in order of appearance" and "Powers and Techniques used."

Fights should be listed chronologically (in the order that they happened or began in that particular episode) and organized using bullets by typing an asterisk ( * ) before the name of the fight. They should be set to default size, not bold or italicized, and should be linked to the appropriate fight page. When a fight concludes, add "(concluded)" to that particular episode to indicate that the fight ends in that episode. If there are no fights in an episode, put "None" in the Fights section.

For example, a proper listing for Episode 39 would look like:

What is a fight and what's not?

To aid you in writing the powers & techniques section, here is an example of what it should look like. If there are no powers or techniques used, just write "None" under the heading. A couple of points that need clarifying:

Episodes Being Worked On

These two episodes have little to no meaningful summary. A proper summary needs to be added, keeping within the guidelines above - it is just a summary not a word for word account of what happens in the episode.

Getting Overhauled Including Many Images

Getting Updated Including Images

The episodes here have been labeled as finished, but could still have a missing or inaccurate detail and must not be removed until the Projected Finish Date; and even then, only an Administrator or Seated Member is allowed to do this.