Bleach: Memories of Nobody poster.
Add an image to this gallery 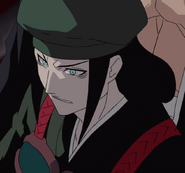 Mue
Add an image to this gallery

The panels indicate the Onmitsukidō members have been killed.

Ichigo performs Konsō on a Plus.

Ichigo and Kon gag after Rukia Kuchiki forces them together.

Ichigo bolts up after returning to his body.

Rukia throws Kon at Ichigo so he can use him.

Ichigo and Rukia run toward the source of the Reiatsu.

Rukia exits her Gigai to deal with the Blanks.

Ichigo attempts to perform Konsō on a Blank, but nothing happens.

Senna cuts through the Blanks.

Senna celebrates her victory over the Blanks behind Ichigo and Rukia.

Ichigo's body lies on the ground with Kon's Mod-Soul pill and three police officers next to it.

Ikkaku prepares to resume his sparring with Iba.

Rukia is exasperated by Senna not knowing what division she belongs to.

Rukia states she cannot contact Soul Society and is concerned about what they witnessed earlier.

Kon alerts Ichigo to Senna having wandered off.

Hitsugaya states he is in charge of this mission.

Urahara notes Ichigo is referring to the Blanks.

Urahara explains how the Valley of Screams and Blanks are created.

Kon recounts seeing the armor-wearing man in the midst of the Blanks.

Tessai tells Ichigo he will take Kon's Mod-Soul pill in for analysis.

The two men pull off the jacket and pants of the announcer as the culmination of their skit.

Ichigo returns Senna's ribbon to her.

Senna puts the ribbon on in front of the mirror.

Jai lifts Senna up by the throat and begins to choke her into submission.

Senna reveals she has memories from when she was alive and wants to follow up on them.

Isshin Kurosaki stands in shock as his daughters welcome Senna.

Senna informs Ichigo of how her attackers wanted to bring her to their leader.

Isshin and Yuzu eavesdrop on Ichigo and Senna.

Ichigo talks to Urahara about what has happened.

Urahara notes it is rare for a Soul to remember its Human life.

Ichigo notes the size of the crowd at the station.

Ichigo asks the young Plus what is wrong.

Ichigo carries Tomoya on his shoulders.

Senna says they will find a festival for Tomoya.

Ichigo sees a festival hidden behind an enclosed space.

Tomoya reunites with his father at the festival.

Senna asks why people around her keep disappearing.

Senna is shocked by there being no records of her existence.

Senna is confused by her conflicting memories.

Ichigo stops Senna as she begins to panic.

Ichigo demands to know if they will ignore Senna's humanity.

The people in the pavilion transform into Blanks.

Ichigo attacks Jai after he appears in the pavilion.

Senna slumps over after Ganryū punches her.

The Blanks explode around the Keigun.

Ichigo points his sword at the Dark Ones.

Ichigo is impaled by Ganryū.

Uryū asks how the Dark Ones can accomplish their plan.

Ichigo grabs Zangetsu and leaves upon learning there is an entrance somewhere in the Human World.

Ichigo picks up Senna's ribbon upon finding it.

Ichigo blames himself for Senna being taken.

Ichigo jumps off the top of the Ferris wheel.

Ichigo falls to the entrance.

Senna lies unconscious in the Valley of Screams.

Ganryū tells Riyan to relax after he snaps at Senna.

Mayuri generates a hologram of the Valley of Screams.

Ganryū raises his sword in preparation.

The tornado of Blanks around Senna intensifies.

Senna is struck by lightning as the ritual progresses.

The doors open as Rukia interrupts the captains meeting.

Rukia apologizes for interrupting the meeting.

Rukia and Renji watch the preparation of the Kidō Cannon from afar.

The threads are cut in two by Ichigo.

Ichigo crosses blades with Ganryū, who taunts him.

The threads of Blanks constrict Senna.

Rukia and Renji emerge from the Senkaimon.

Hitsugaya sits under the bridge on a support beam.

A laughing Kenpachi falls into the Valley of Screams.

The ice dragon returns to Hitsugaya.

Ikkaku runs down a slope toward the Blanks.

Benin aims at Yumichika with her crossbow.

A Hōmonka appears on Benin's midsection.

Mue slashes Kenpachi across the chest.

Kenpachi leaps towards Mue after withstanding the explosion.

Riyan is killed by Hitsugaya's Bankai.

Bau appears behind Ichigo and prepares to attack him.

A tornado forms as Renji activates his Bankai.

Ichigo lands on a branch in search of Senna.

Several Blanks emerge from the branch behind Ichigo.

Ichigo coughs up blood after being stabbed.

Ichigo frees himself from his bonds on the tree

Black lightning flashes in the Valley of Screams.

Bau is crushed and killed by Hihiō Zabimaru.

Jai's chakram transform into clones of himself.

The clones are obliterated by Senbonzakura Kageyoshi.

Ganryū is bifurcated and killed by Ichigo.

Ichigo returns to the Human World with Senna.

Senna's ribbon floats away in the wind.

Rukia is forced to her knees by the realms merging.

Senna says she is scared of what she must do.

Ichigo carries Senna through a graveyard.

A crying Senna tells Ichigo she is happy.

Ichigo grabs the hair ribbon.
Add an image to this gallery

Senna exits her Gigai.
Add an image to this gallery
Retrieved from "https://bleach.fandom.com/wiki/Bleach:_Memories_of_Nobody/Image_Gallery?oldid=518760"
Community content is available under CC-BY-SA unless otherwise noted.