Using the eyes on his body, Zommari can take control of one object per eye, which he refers to as "stealing the sovereignty of whatever it sees". He usually gestures with his hands while doing this. It is initiated when Zommari fixes the gaze of one or more of his numerous eyes on specific target(s), after which the pupil(s) will widen and the eye(s) itself will glow purple. When Zommari takes control of an object, a sun-shaped tattoo will appear on said object, giving Zommari full control over it. If targeting an opponent's limb, it removes the brain's control from the said limb, allowing him to control his opponents' movements or force them to inflict self-harm.[1]

Each one of Zommari's eyes can take control of a single separate target. By targeting his opponent's head, Zommari can take control of that person's entire body.[2] Zommari can create up to fifty eyes, enabling him to control a maximum of 50 things.[3] However, 6th Division Captain Byakuya Kuchiki deduces this ability is Kidō-like in nature, and can thus be countered through similar means, such as blocking Zommari's gaze with Bakudō #81. Dankū.[4] 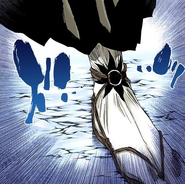 Zommari forces Byakuya to move his leg with Amor.

Zommari targets Rukia and activates Amor in two of his eyes. 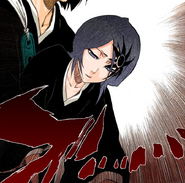 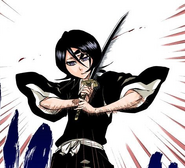 Zommari uses Amor to threaten Rukia's life with her own blade. 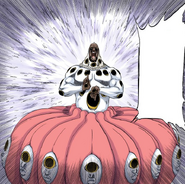 Zommari tries to use Amor on all the fine blades of Senbonzakura Kageyoshi. 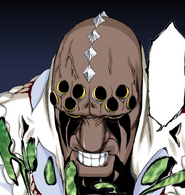 Zommari reveals more eyes with which to use Amor.

Zommari's Amor is blocked by Dankū.
Add an image to this gallery

Despite Byakuya shielding her, Rukia is caught using Amor.

Rukia slashes Hanatarō Yamada while being controlled with Amor.

Byakuya blocks Amor.
Add an image to this gallery

Retrieved from "https://bleach.fandom.com/wiki/Amor?oldid=529555"
Community content is available under CC-BY-SA unless otherwise noted.